[Editor’s Note: It took time for us to fact check this. Thank you for your contribution.]

School teachers from Newtown Connecticut to Columbine Colorado and Belmont California should be alerted to Civil Air Patrol’s current political progress. The Emerald City Cadet Squadron here in South Carolina has proudly announced the completion of a successful second training session at the Upper Savannah Shooter’s Association on September 21st.

Civil Air Patrol accepts students age 12-21 along with some very special adults 18 and over. In addition to training young people how to aim and shoot for accuracy, Civil Air Patrol has distinguished itself with multiple recent airplane crashes, suicides, weapons discharges, cadet homicides and sexual offenders who have been in and out of prison.

Civil Air Patrol seniors, even those raised to the position of unit commander, often lack the emotional maturity for the role. One Kansas Wing Civil Air Patrol commander with a gun fetish lost his squadron command after making aggressive comments toward an elected representative of that state.

Civil Air Patrol members later commented on this story that we should add:

Swivel Chair Patrol‘s November 23rd 2017 tweet that a Civil Air Patrol Cadet Airman threatened to kill his unit’s 1st Sergeant, got 2B’d, and then shot up his school and killed himself. 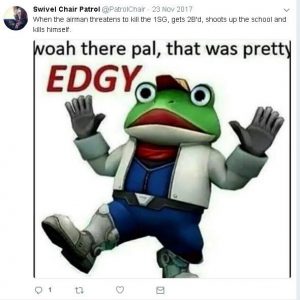 In October 2017, a Civil Air Patrol member contacted AuxBeacon to express concern regarding what they perceive as current and covert Ku Klux Klan influence in the Civil Air Patrol. That member pointed us to this KKK firearms influence story from 1980 and the ‘investigation’ conducted by Civil Air Patrol Major Paul Renfro. They were looking for support and more current information and evidence.